We, the “Cousteau Children”….. 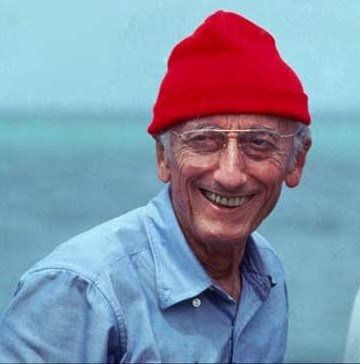 Jacques-Yves Cousteau died 22 years ago on June 25th, 1997 leaving behind a generation inspired by his fascination for the sea and the ocean’s depths. “The Cousteau Children.”

His breath-taking films and documentaries have always captivated my attention and even now I love to watch them with my son, but from a different perspective and a deeper level of appreciation.

French to the core with a passionate, contagious personality, Cousteau’s underwater movies are nothing but captivating. The World of Silence – one of his first underwater films is certainly questionable these days with regard to killing fish and removing corals from the reef for scientific research, but those were the ways and feelings of seafarers at the time.

Aboard the commandeering Calypso, a former British Royal Navy minesweeper which was converted into a research vessel, Cousteau was an oceanographic expert in all its glory. Equipped with mobile laboratory for underwater exploration, Cousteau had the tools necessary to become a scientist, navigator and environmentalist. But he also shaped up to be an exquisite director, writer and inventor amongst other things.

Cousteau and his impact on modern diving:

At the age of 26, Jacques-Yves Cousteau invented a form of tin eyewear that served as a model for current diving masks. At the outbreak of WWII, he became part of the French secret services but still managed to devote himself to research and, in collaboration with the engineer Emile Gagnan, invented the aqualung. This was the first single-stage regulator that allowed the compressed air to breathe in a cylinder through two large corrugated tubes. It was not yet the modern two-stage regulator – which will later be developed by Gagnan in Canada after the end of the war – but it was still a piece of equipment to dive and breathe independently, without being tied to a support boat. Modern diving was born with aqualung.

This was not the only invention to which the Commandant gave his contribution. We must also remember the Calypso-Phot, an underwater camera made in 1963 with the help of another engineer, Belgian Jean de Wouters. The Calypso-Phot was the first underwater camera within reach of many. The concept was eventually purchased by Nikon, a move which helped to revolutionise underwater photography.

It was also Cousteau who invented the first two-seater submarine to explore the seabed, the famous Soucoupe Plongeante, which reached a depth of 350 meters.

As well as being a masterful inventor, Cousteau also constantly looked for answers. It was this curiosity which led him to pursue numerous projects including what it would be like to inhabit the ocean. In 1963, in Shaab-Rumi, Sudan, Le Commandant built two underwater apartments, one at 10 and the other at 25 meters deep, which housed the first ten “aquanauts” for a month of underwater life. The experiment was called Précontinent II and continued work that Cousteau had begun in 1962 with the first saturation diving: two people lived and worked for a week in an underwater bell.

After WWII, he worked on a demining system that allowed the French Navy to remove the war bombs abandoned at sea, and actively engaged in keeping track of men’s madness in the oceans. His campaigns against the abandonment of nuclear waste at sea were highly significant and important.

We are all Cousteau Children:

Marine biology as we know it today owes a lot to Cousteau. On board the first modern oceanographic ship in the world, Commander Cousteau created a series of scientific divulgation documentaries, helping to focus attention on the sea and its many problems. The ocean, for the first time, was portrayed not as a resource for fishing or sourcing minerals, but as a magical universe inextricably linked to human life.

All of us, in a certain way, are “Cousteau Children.” He gave us great insights into sea life and what happens beyond the crashing waves we see from the shore. He offered the first fantastic images of a world that thanks to him continues to be discovered and explored.

The conservation of the sea is in our hands and we are all responsible. On the basis of this principle, Cousteau has written and presented UNESCO the Bill of Rights for Future Generations, to which more than one hundred countries have joined. In 1973 he also founded The Cousteau Society, a foundation that actively takes care of the sea. It has a following of thousands in the US.